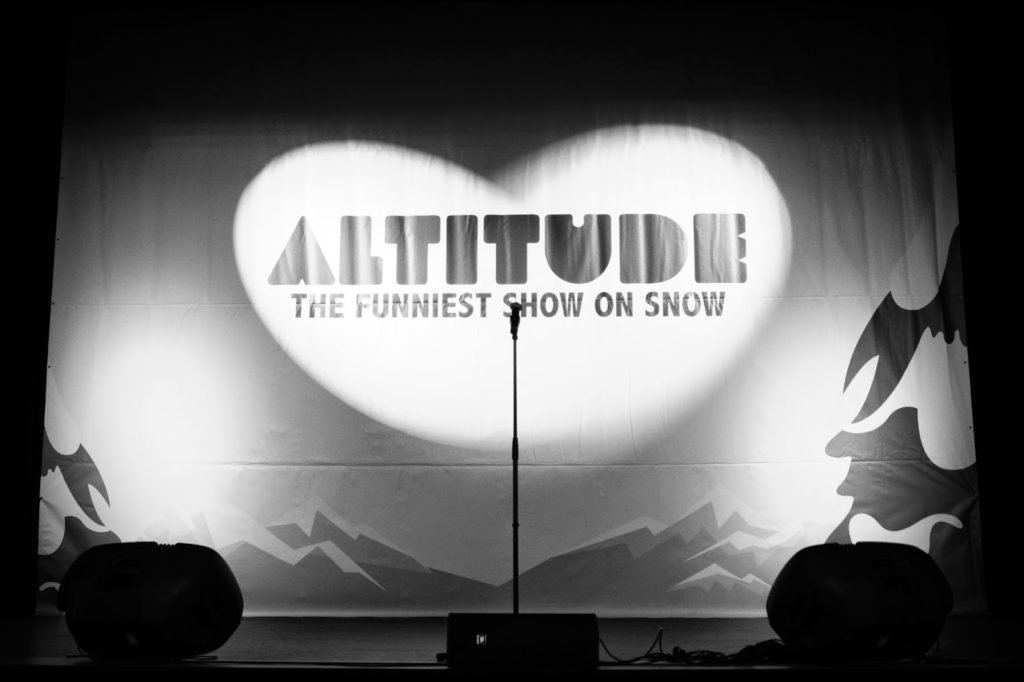 “Could all the clowns gather for a photo?” called out official Altitude Festival photographer Anthony Upton at the media gathering held in the gardens of Hotel Strass, the backdrop a perfect curve of snow-capped Alps.

Clowns? Clowns? Who’s he talking about? Does he mean me? Am I a clown.

No, I am not a clown. At least not on that day. For clowns are comedians and despite my best efforts, I am no comedian.

But I do know how to laugh and after spending five days at Altitude Festival I can now give you the names of five comedians you should check out if you want to laugh to.

I could also give you the names of the festival’s headliners who were equally as funny – and arguably more polished (not necessarily a good thing) – but you probably already know a lot about Al Murray, John Bishop, Tommy Tiernan and Nina Conti. (Nina Conti… wow, just wow. If you have half a chance to see her live, take it and try to find the other half.)

Zoe had me at “Does anyone else panic in a tapas situation?” plucking at my irrational reluctance to share food. She then went on to woo me with her elaborate  and surprisingly physical display of how one squeezes the last drop out of a box of wine (you’re already out of touch if you didn’t know that there is a bag inside the box) and when it came to describing her home town of Brighton – “where middle-aged lesbians wash up onto the pebbles” – I could nod along with all the weirdness she described having lived there myself for a summer last year.

My boyfriend – the open-minded Australian – whispered to me as Zoe first walked on stage “I don’t like female comics”. Four days later, we left Mayrhofen with Zoe also in his top five clowns and I will dine out on that for quite a few years.

Staying with my boyfriend’s Top 5 Altitude Comedians, his number 1 was this chap, Rob Beckett who looks like a cross between Boris Johnson and the PG Tips monkey. Hey, I’m allowed to say that! He opens his show with the quote “Hi I’m Rob, I’ve got big teeth!” before explaining that it’s because his mum drank a lot of milk when she was pregnant with him and his dad was a horse. Playing on his working class background (“You know you’re working class when your telly is bigger than your bookcase,”) and his fondness for the simple things in life – squash, eating your dinner off your lap and how your dad just wants to give you traffic advice – Beckett was confident without being cocky and funny without being too offensive. In other words, mums will love him!

Poor Benny was an accidental star of Altitude on account of him breaking his arm in a snowboarding accident quite early on in the festival which he explained by saying “Red Bull does NOT give you wings”. It didn’t dampen his performance which was a series of stories that played on familiar scenarios and not-so-familar scenarios. My favourite was how he demonstrated taking someone’s clothes off with his eyes.

My boyfriend and I actually saw Mr Boot preparing for his show by walking up and down the main road in Mayrhofen seemingly talking to himself. It served to remind us that these comedians don’t just rock up on stage half drunk with nothing prepared (at least not all of them do that.)

Scottish – and obviously proud of it – Daniel Sloss is like Marmite spiked with Vegemite, some will really, really love him and others will find him hard to swallow. His jokes danced around drugs, alcohol, religion and abortion among other topics and I’m a little fearful to share some of his jokes on here.  Here’s a sneak peak at what he’s capable of. While I’m normally the first to criticise distasteful jokes, there was something utterly convincing about Sloss that had me laughing despite myself.

Mr Dommett was the first clown we saw take the stage at the Gala show held in Altitude’s largest venue, Europahaus, and one of the first things we watched him do was share a recording of a rap record he made aged 15(ish). (You can see this sketch here.) Others may recognise Joel from the BBC Three series Impractical Jokers, I didn’t, but I can see why he has television appeal with trendy good looks and a knack of looking good in skinny jeans.

Later in the week Joel and Zoe Lyons joined other comedians to be part of Joke Thieves, which sees performers steal each other’s routines. Joel was tasked with impersonating Zoe who had intentionally downed a pint during her earlier performance. Dommett stepped up and put away the best part of three pints in less than ten minutes. We didn’t see much of him after that…

A special mention should also go to Andrew Maxwell, an Irish comedian (with a very English name!) who is one of the founders of Altitude and was the festival’s lederhosen-clad MC and spokesperson. His jokes didn’t just fill gaps in the sets but were also some of the funniest. I particularly liked his story about how nothing shocks Norwegians in the bedroom but how  they were floored by a revelation that Maxwell made about the Irish; they don’t recycle.