When Kash approached me and asked me to be part of  “an exciting new festivals project” I envisaged a summer spent sleeping in a tent, hanging out with guitar-strumming, bearded musicians while I wore a circle of flowers atop hair that hadn’t been washed in weeks.

What I did not expect was to find myself lost in a historic Austrian city on a rainy Sunday in March as I set out on the hunt for an art form I knew nothing about. Nor did I expect to enjoy this so much.

This is the story of SuuuperSonntag at NEXTCOMIC Festival in Linz. You can get the lowdown on the festival and some tips for visiting here.

Do you want to know  the moment I knew I was going to enjoy NEXTCOMIC Festival? It was when I saw this mural lining the entrance to the Offenes-Kulturhaus – or “das OK” – the home of SuuuperSonntag and the place where the majority of NEXTCOMIC’s exhibits, talks, presentations and performances were held. If I know nada about comic art, I know a little bit más que nada about street art. And I knew about NYCHOS, of Rabbit Eye Movement, a street art collective from Vienna. NYCHOS’ disembowelled characters are instantly rcognisable and instantly engaging. In my opinion it’s street art at its best, so to see him giving his magic treatment to my favourite Disney character (as gruesome as it may be!), it was a perfect welcome. Once inside the OK building, I saw that NEXTCOMIC took over three of many floors inside the OK building and the staircases were covered in a kind of comic art I didn’t expect; children’s drawings. The festival had collaborated with local school children and a vast and varied collection of drawings, collages and paintings successfully communicated NEXTCOMIC 2014’s theme; the Danube. To visit Linz and not learn about the Danube is like visiting London and ignoring the Thames. This bend in one of Europe’s most famous rivers – and the longest in the EU – not only gave Linz its name but also continues to serve the city’s main purpose; the steel industry.  But let’s not float away on the Danube too soon…

So I walked past more artwork by Rabbit Eye Movement and I reached an open corridor where I joined a solitary spectator in admiring a row of colourful and satirical drawings by Milan Ilic, a Linz based cartoon artist whose work regularly appears in English and German-speaking magazines and newspapers. I may not have understood all of the references or the ironies in his drawings, but I appreciated the artwork and how well it was displayed with a soft light streaming in from the windows behind this mesh display. His work reminded me of the British comedy show of once upon a time Spitting Image and even this tenuous link seemed to wedge open a door to my mind as I began to lose my preconceptions about a comic festival and simply followed signs to more exhibitions. The second room I walked into was full of… how do I say this?… hipsters. A man in a beret stood next to me for a long time stroking his impressive beard as he looked at the original sketches of Nicolas Mahler. On the other side of the room a woman with an impressively scruffy up-do smiled to herself at the work of Ulli Lust, one of Austria’s leading female comic strip artists. Of all the festivals on this year’s line up, I did not expect to see hipsters at this festival. It only served to widen the gap in the door of my mind as I too smiled at the minimalist drawings of Rudi Klein, all the while putting my intermediate-level German to the test. 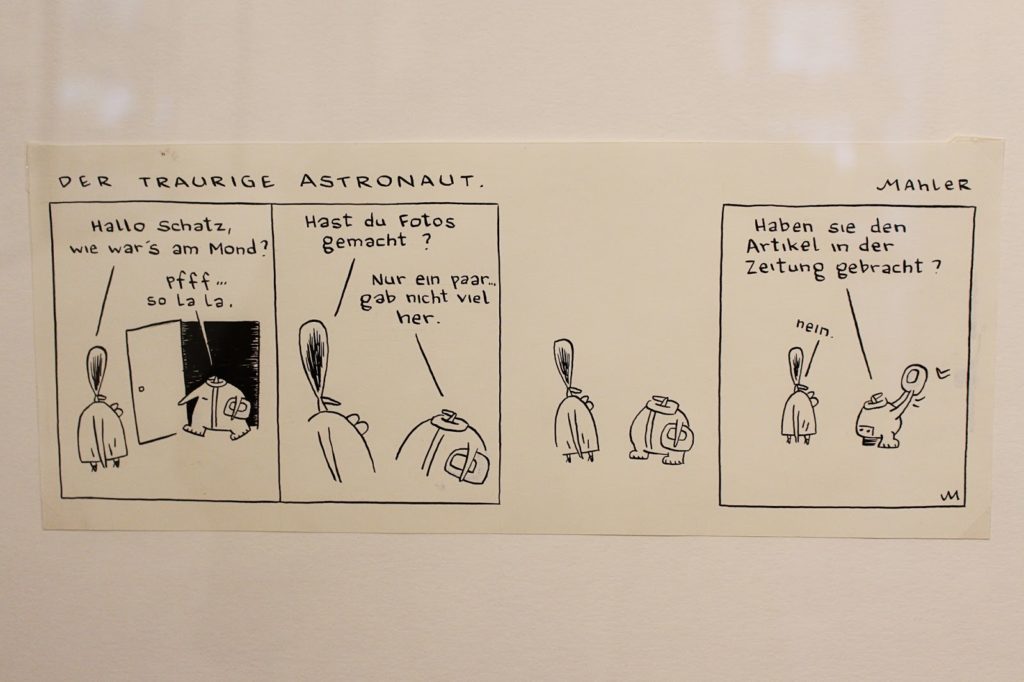 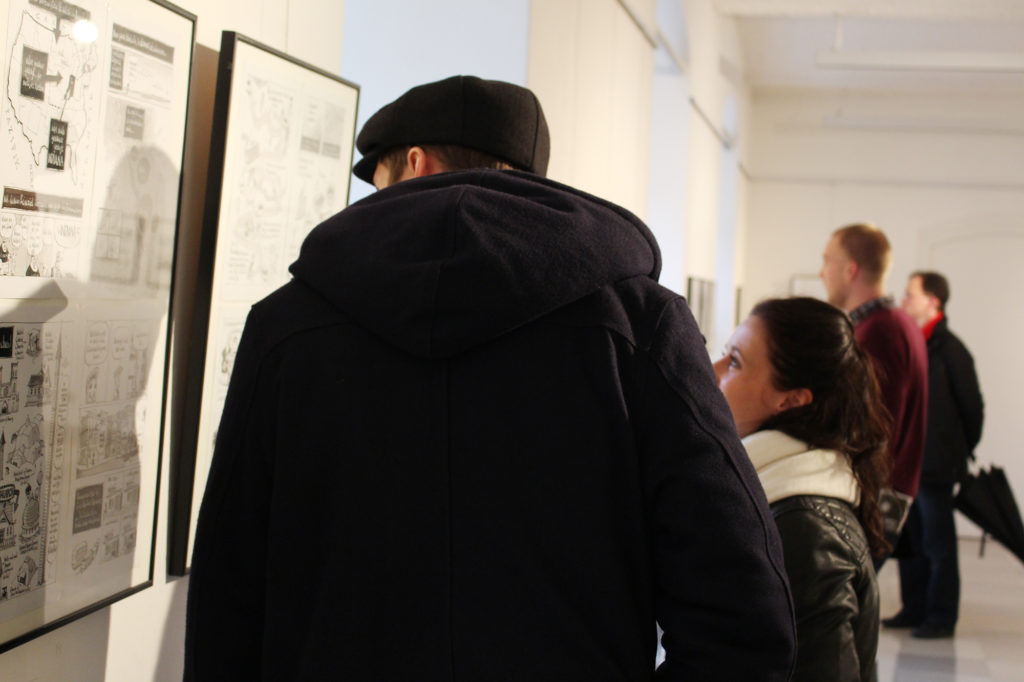 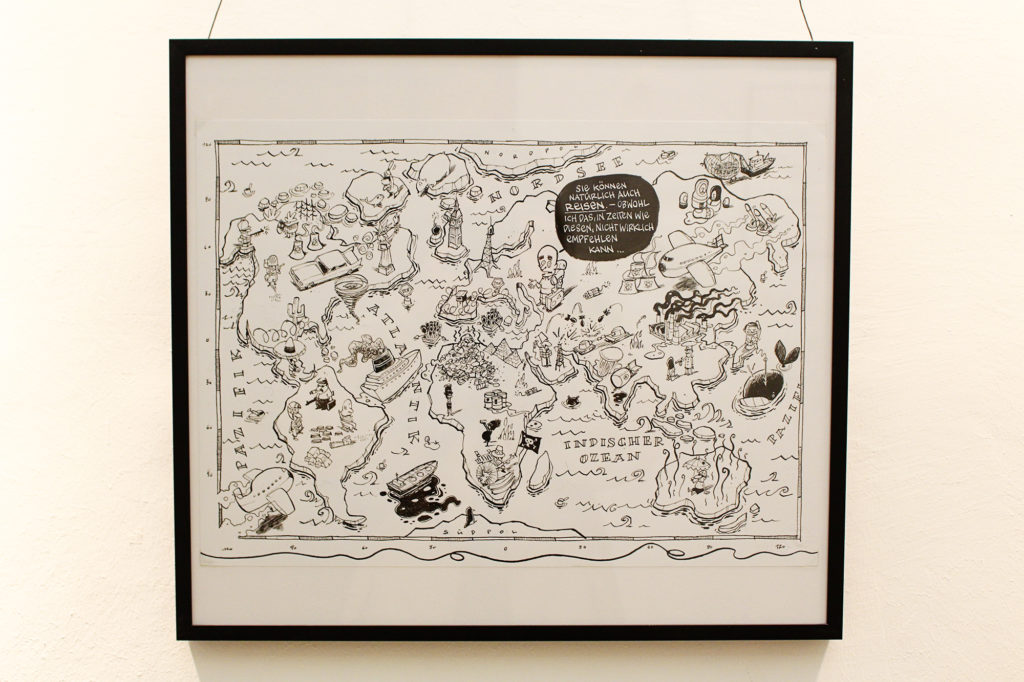 What I loved about this particular exhibit was the glimpse it gave into a comic artist’s process with the display of tracing paper sketches lined on top of each other to build the final artwork. Little did I know what was going to happen in the next space I walked into upstairs, as I approached a large open space full of tables. At many of these tables were the bowing heads of artists at work.

As well as selling collections of their work or magazines compiled by collectives they were part of – FYI collectives are a big deal in comic art; I suppose this makes them the rappers or rock  musicians of modern art, hanging around in groups and most likely not smashing up hotel rooms but rather covering the walls with comic strips, and it felt a little exciting to watch artists busy at work producing live drawings you could buy instantly but just a couple of Euros. It was on the stage that lined one side of this large space that a number of performances, talks and presentations took place throughout SuuuperSonntag.

And to the side of the stage, there was  a table set aside for artists to sign their books and chat with fans. And indeed there were many fans there. One artist that seemed very popular on the day – and I have since learned has a global following – is Kyle Platts, who was the “headliner” of the festival.

This unassuming young man from Sheffield has been commissioned by some of the world’s leading publications and even I could see how striking his work was with neon colours filling the page and geometric shapes adding depth and texture.

Children (or adults! Because I did!) could even pick up a special print out of a Kyle Platts drawing that they could colour in. And on another floor I saw children were invited to help build a boat while their parents and friends looked on enjoying beers and drinks being sold at a makeshift bar. I went back to the main room and perused the work of artists. Some were even giving away free samples and I picked up his bookmark by Ana Albero for Latvian comic anthology publishers kuš. The OK building where SuuuperSonntag is in the centre of the OÖ (OberÖsterreichische) Kulturquartier, another initiative leftover from Linz’s year as European Capital of Culture in 2009 but it is one that has flourished and is reason enough to visit Linz, not just because of a yearly calendar of arts and culture but also because of a summer called HÖHENRAUSCH. A rough translation is “The High Inebriation” which depending on your personality you’ll either be instantly intrigued by or be a little concerned about.

You really should be fascinated because it involves exploring a rooftop network of wooden buildings constructed with the purpose of showing off Linz’s rooftops which show just how varied in style and history the city is. The focal point of HÖHENRAUSCH is undoubtedly the “Keine Sorgen Turm” which was open for the first weekend of NEXTCOMIC.

After a series of presentations and live drawings on the main stage, SuuuperSonntag came to a close with a slightly abstract performance by two female actor-artists who sort of acted out a comic strip of a drama, cutesy Japanese-style short skirts and all. But by this time I had my Biografiktion comic book about ABBA to take back to my hotel and read. And it had been lovingly signed – with my own personal drawing of ABBA – by the artist. And I have to say this was just as cool as I imagine hanging out with a bearded guitar-strumming musician would be.