I was in Linz for NEXTCOMIC Festival, which is number 21 to visit this city that is famous for steel, for its position on the Danube (about halfway from between the river’s source and Budapest) and for being the administrative capital for Upper Austria. While these may not be reasons to get you excited for a visit to Linz, the following twenty should get you thinking otherwise.

1. Admire the view from Pöstlingberg, the 550m hill that overlooks the city from behind the castle. You can make the climb by foot or you can cheat and get the vintage-looking Pöstlingbergbahn tram up, which handily you can catch from Hauptplatz. 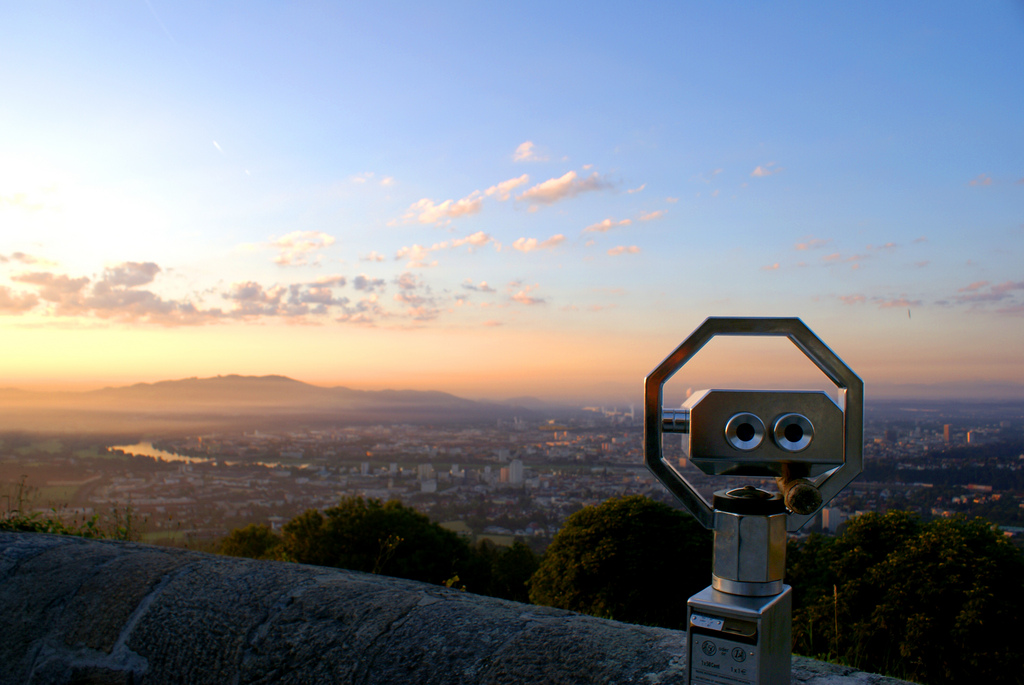 2. Visit the castle. From the outside it looks a little unimpressive – albeit with great views across Linz’s rooftops – but inside the Schloss Museum you’ll find what many consider to be one of Austria’s best museums. The terrace and cafe also make for a nice spot.

3. Wander through the oldest streets of the city. Give yourself a few hours and then leave the map at home. You can’t go far and you’re unlikely to get lost, just follow the cobbles and the ever-changing architecture that takes you through the last eight centuries.

4. Cycle along the Danube. It’s flat, you’ll see an ever-changing riverfront from Linz’s centre to its industrial heartland, and you can burn off enough calories so you can… 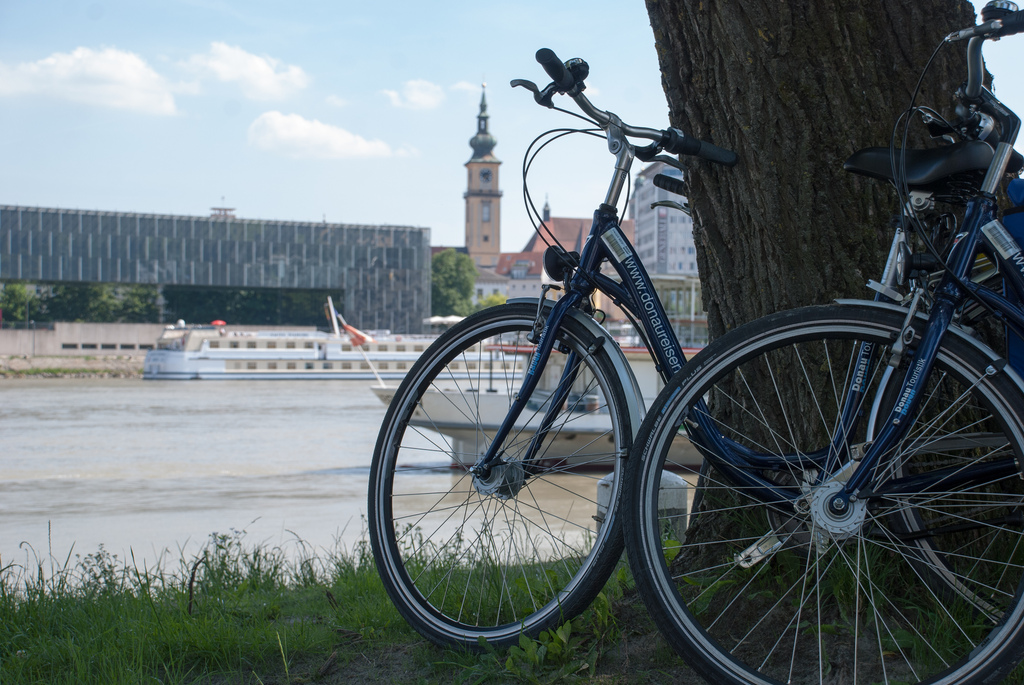 5. Try Linzer Torte. The origins are often debated but what’s for certain is the Linzer Torte is one of  the city’s proudest exports and is a must-eat if you fancy something sweet. It’s designed to last and travel so it also makes the perfect souvenir. I was pleasantly surprised how fresh it tasted for a cake that is considered to be the oldest cake in the world! 6. Learn something at ARS Electronica Centre. One of the venues for NEXTCOMIC events, ARS Electronica is a world-leading museum that is home to multiple hands-on and interactive exhibitions sharing knowledge about the role of science, art and technology in society. Sounds a bit heavy and complicated? It’s not. Just go, explore, have fun. And then admire the views from the cafe at the top where you can feast on huge open sandwiches. 7. Have dinner at Wirt am Graben. This restaurant does something that many would think is impossible; it serves delicious vegan and vegetarian Austrian food. The seasonal menu also has international influences and be sure to try get a spot in the beer garden if the weather is good enough.

Do your best to get your hands on a copy of this book, a guide to the best independent shops, bars and restaurants to visit in Linz.

8. Go shopping. I was reluctant to include this on the list, but Linz does have the second busiest shopping street in Austria and the pedestrianised Landsstrasse will keep any retail addict happy. (Just be aware that most shops will be closed on Sundays.) I also discovered it’s worth exploring the shops on Altstadt like Concept Store, a hub of a shop/gallery selling art and jewellery,  NØRD, a boutique showcasing the best in Scandinavian design and Living, a shop which simply promises “Schoene Dinge” or “Lovely Things” for working, playing and cooking. 9. See the city from the air… but on the ground. Inside the old town hall (found next door to the Tourist Information on Hauptplatz) you’ll find a room covered in one big aerial photo of Linz. Taken as part of a street survey of the city, it’s a great way to see just how green the city really is – and how important that bend in the Danube is. 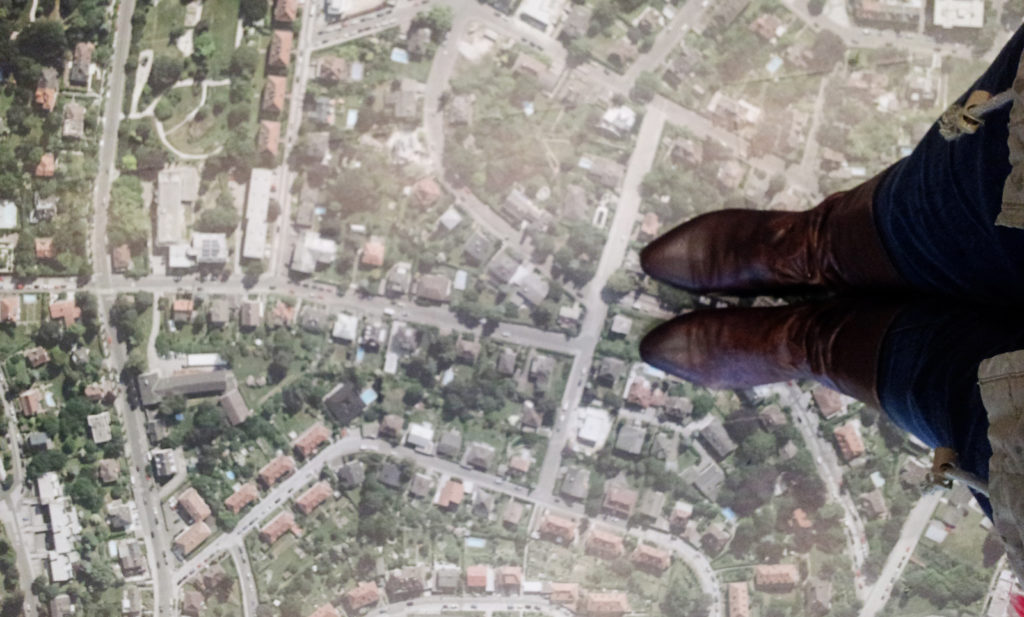 10. Enjoy local craft beer and Austrian tapas at Josef. Josef’s brewery and famous tapas menu lets you taste a lot of Upper Austria in one sitting. A great way to spend an evening!

11. Spend a day at Cesky Krumlov. It may be less than two hours drive away, but Cesky Krumlov feels like it belongs in another place and to another time. Helpfully you can use Euros to buy things and if you have time I highly, highly recommend a visit to the Fotoatelier Seidel, a wonderfully restored old photo studio which tells the story of a two generations of professional photographers ending in the 1950s.

12. Go bargain hunting at the fleamarket on Hauptplatz every Saturday morning. It’s worth it just to soak up the life of this the city’s main square. 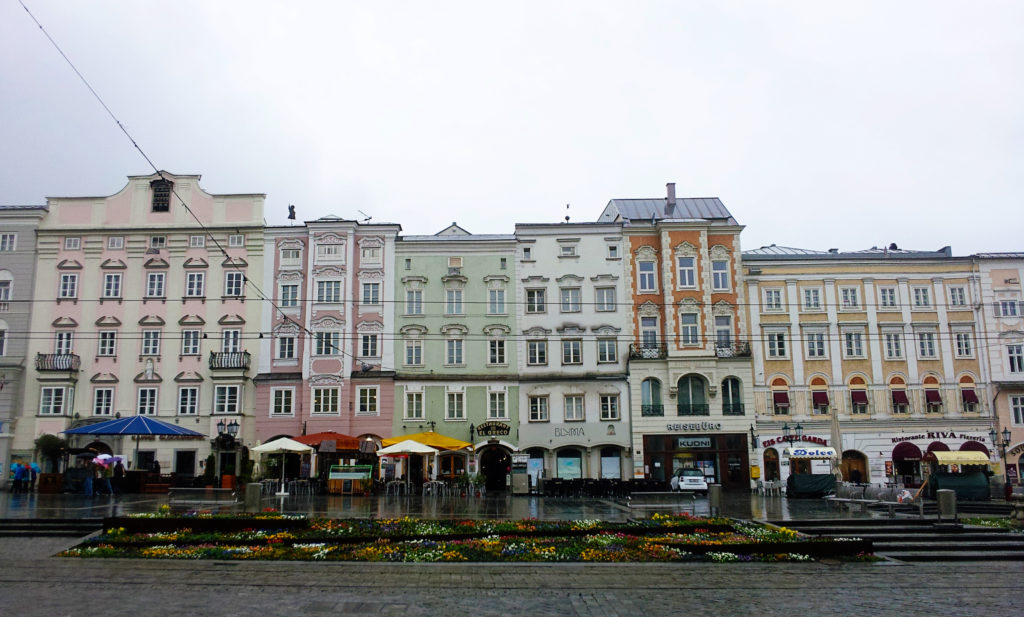 13. Admire the modern architecture of Musik Theater. Google Linz and I can bet you one of the first images that will pop up is of the new Musik Theater, part of the Landtheater in Linz. This new opera house is strikingly modern and put Linz back on the map in terms of musical performances and theatre. It was designed by Londoner Terry Pawson and despite not being loved by all, and maybe you don’t want to actually go to a show, it’s still worth a look at the outside. 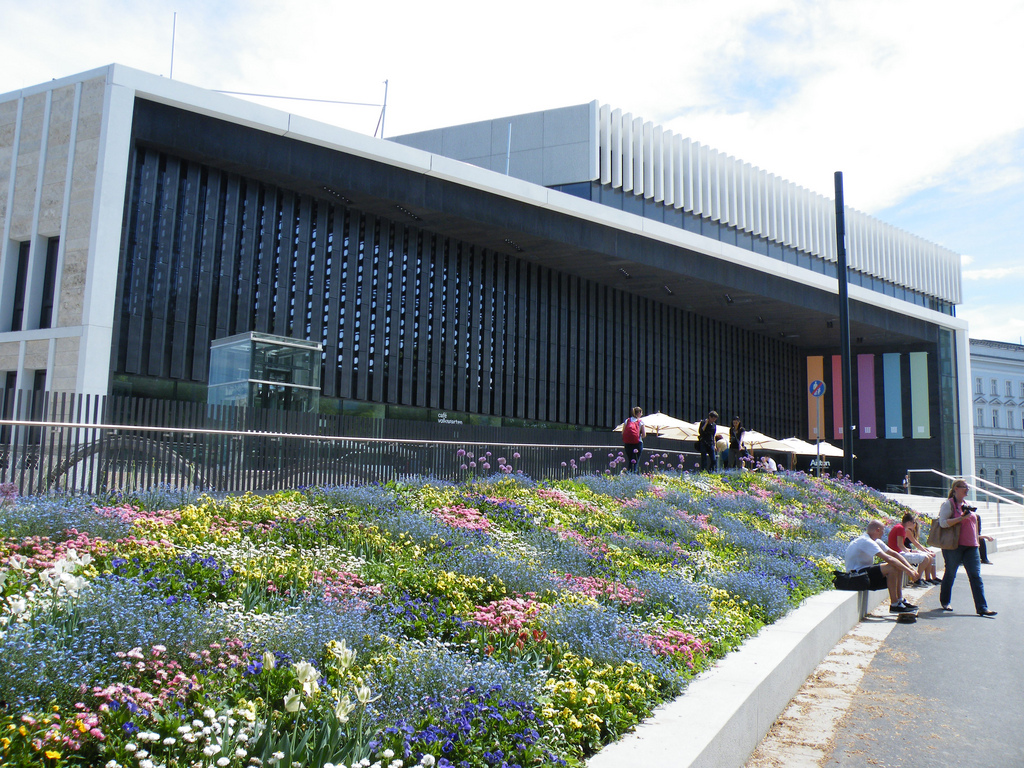 14. Enjoy classical music at Brucknerhaus. Arguably Linz’s most famous son is Anton Bruckner, a composer of symphonies and a complex man who was often ridiculed because he didn’t fit the same mould as his contemporaries. Nowadays his name is an important and oft-mentioned one in Linz as he gave his name to the university of music found in Linz and to the Brucknerhaus on the Danube, one of Europe’s finest venues for classical music and home to the Bruckner Orchestra. 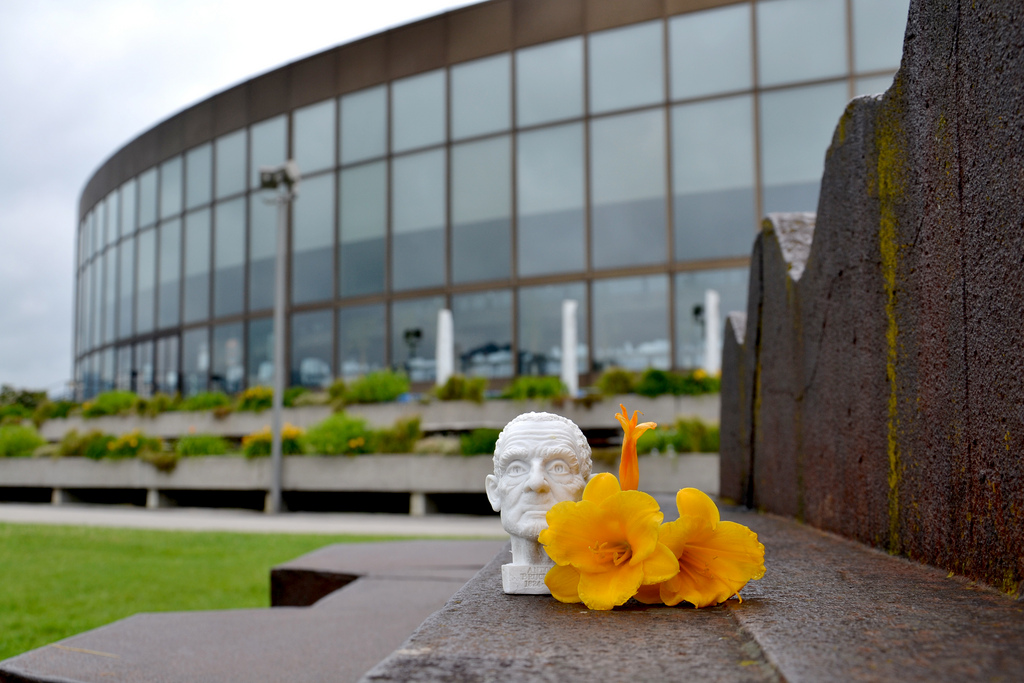 15. See what’s on at the Posthof. Another hotspot for music, Posthof is a venue for music, dance, theatre and almost another kind of performing art. They also have literature events. Coming up in the next few months is Tori Amos, Josh Rouse and Eels so perhaps that goes some way to confirming this as a spot worth checking out. 16. Visit Wilhering Abbey. A short drive from Linz is this 18th century monastery that is world-famous among Rococo architecture enthusiasts. Yes, that is probably a niche group of people, but the good news is that even not-in-the-know-folk like us will be impressed by the detailed interiors and fairy-tale exterioris of this beautifully restored buildings set in the lush green rolling hills of Upper Austria. 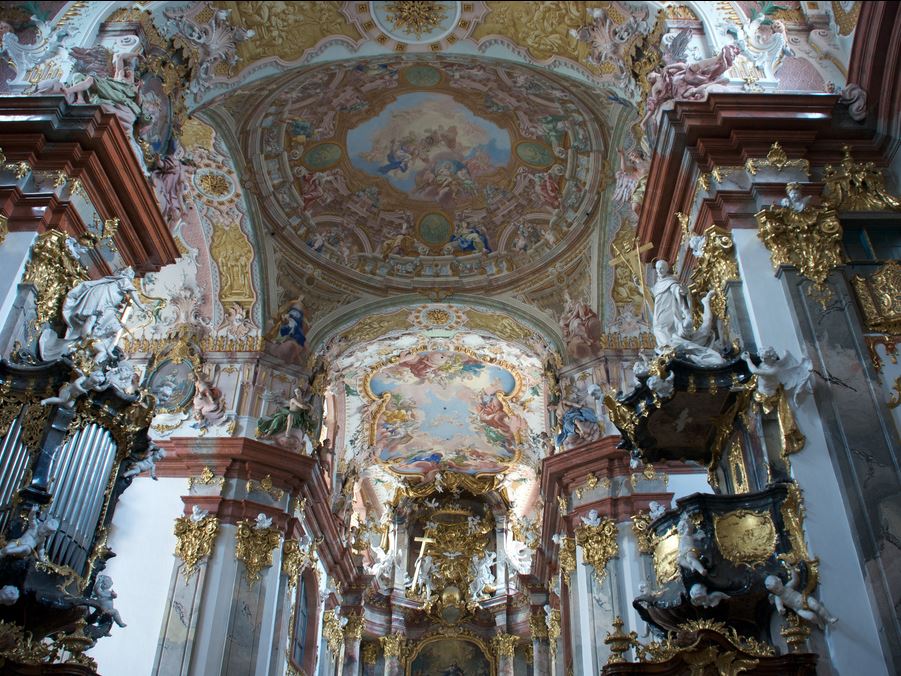 17. Admire some modern art (and more modern architecture) at Lentos Art Museum. I’m sort of kicking myself for not having enough time to lose a few hours in Lentos, a home for contemporary art. I didn’t even have a chance to see it all lit up along the Danube. Please do these things for me! 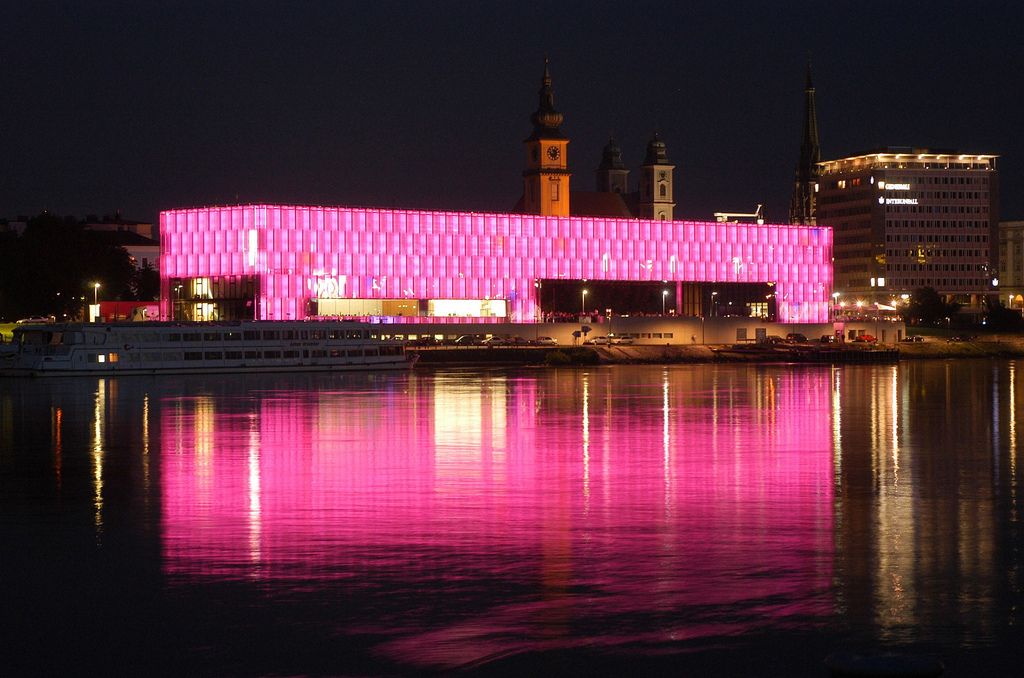 18. Be a radio star! Linz’s premier independent radio station, Radio FRO wants to help you release your inner DJ through its open-to-everyone radio workshops and watching the professionals in action. Found on the first floor of Stadtwerkstatt, find out when the next workshops are being held here.

19. Enjoy burgers at Exxtrablatt at 6-12 Spittelweise. Apparently the best burgers in the city and one of the best bars for cocktails too. Win win!

20. Go to another festival… We like  the sound of Bubble Days a festival which combines live music with the Red Bull wakeboard competition Waves of Steel. All photos by Frankie Thompson and Linz Inside except Posthof, Wilhering Abbey and Bubble Days.